Bosnia & Herzegovina was one of those places people would go wide-eyed when I told them I’d be headed during my solo Europe trip last year. And in part, I don’t blame them.

On the forefront of the Yugoslavian Civil War, Bosnia had a bad rep in the 90’s as one of the most treacherous territories in the world. While I was too young to remember, people like my parents who saw the horrors broadcasted onto their TV screens at home still held the same war-torn impression for the area.

Fueling the fire behind my curiosity for Bosnia was a fascination for my relatively unknown Yugoslavian family heritage who migrated to the State’s during WWI. So I set out to see for myself the place that my parents and their friends expressed hesitancy for. After checking off Slovenia and Croatia from my Yugoslavian bucketlist, I hopped on a two hour bus ride from Split to explore the top things to do in 24 hours in Mostar. 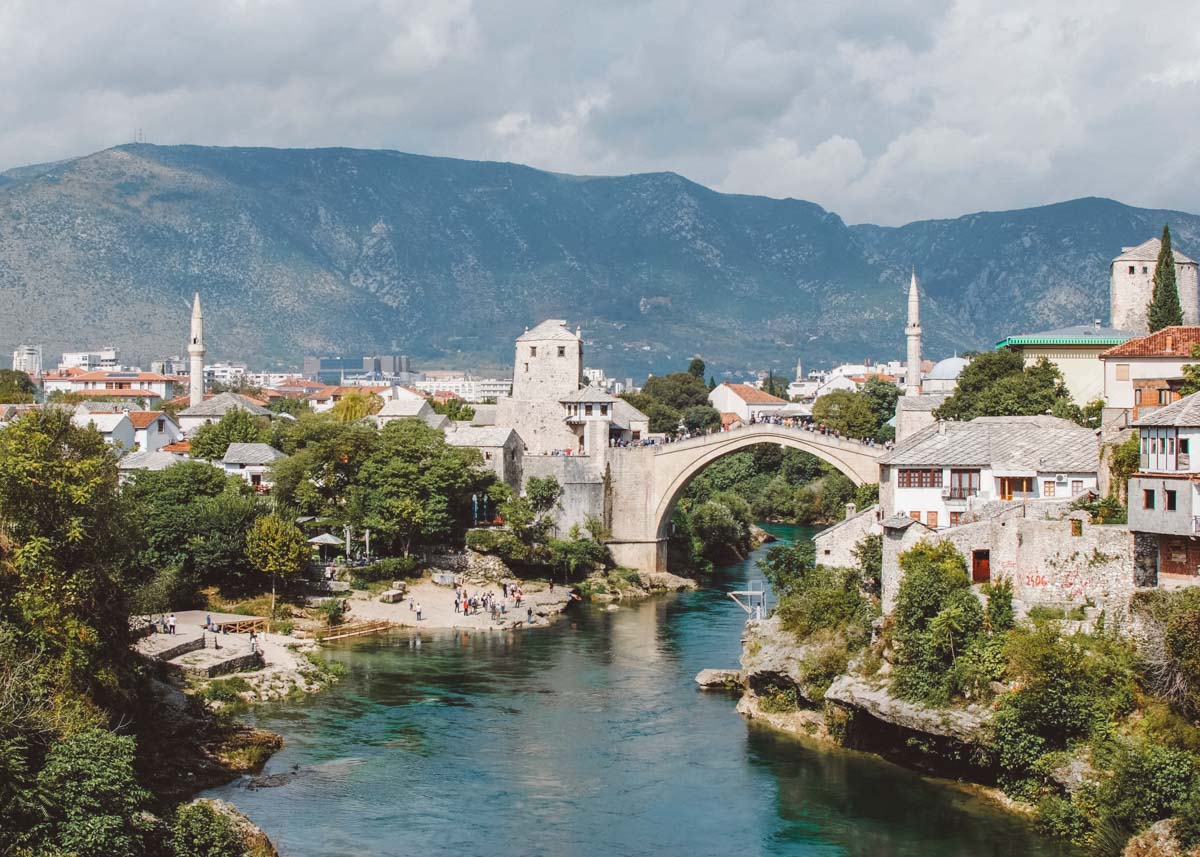 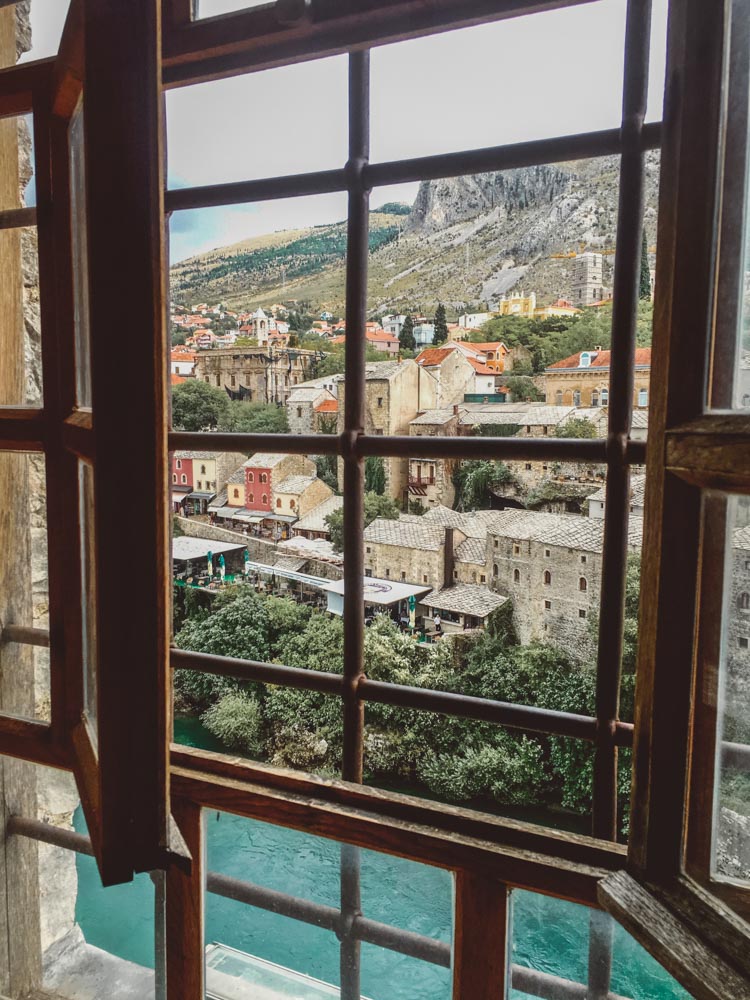 Although I went without many expectations and only 24 hours in Mostar, the city absolutely blew me away. With the ever growing popularity of Balkan countries like Croatia, Mostar represented much more than just another tourist hotspot, great for a quick daytrip. 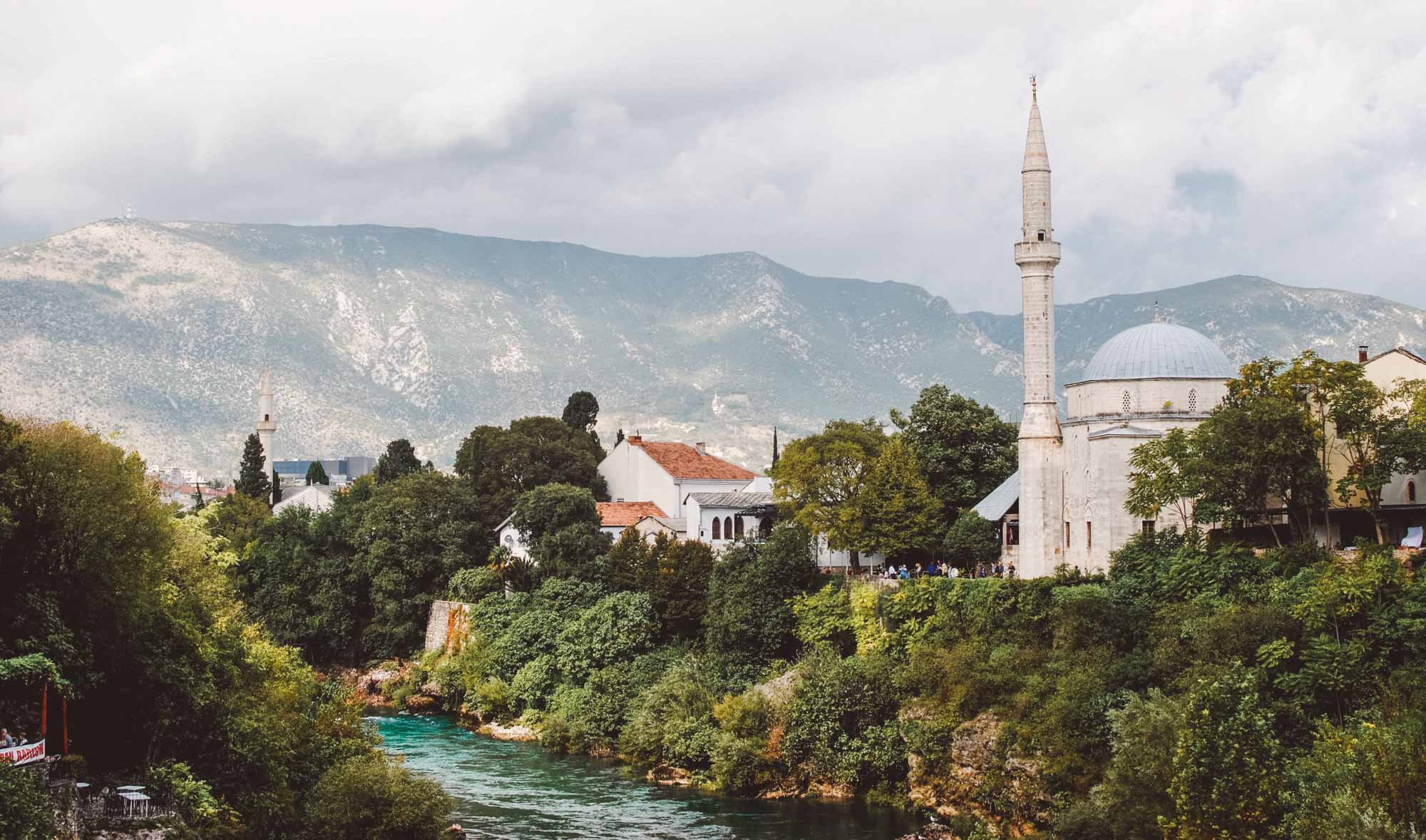 It’s a town whose hospitable residents readily invite you to explore its beauty. However through this beauty, they also beckon you to remember the vicious cycle of a war they endured not too long ago.

Mostar is a community of highly visible cultural crossroads. Three predominate ethnicities exist within Bosnia & Herzegovina that lived harmoniously during Yugoslavia’s unification, something virtually unseen elsewhere in Europe. These groups consisted of Muslim Bosniaks, Catholic Croats and Orthodox Serbs.
Walking through the streets of Mostar even today you can see these cultural differences. At the threshold of the Koski Mehmed Paša Mosque a giant cross peaks down into the city from the surrounding mountains.

When Yugoslavia collapsed in the early 90’s from a vicious ethnically rooted civil war, Bosnia became the forefront to a horrific conflict. In cities like Split and Dubrovnik, the war can be easily forgotten. Mostar is a different story. Although most of Old Town has since been reconstructed, including the famous Stari Most bridge, just a few streets out the remnants of war are highly visible.

Remenants of the destruction of war->

Where to Stay in Mostar

There’s no better example of the overextending hospitality I found in Mostar than through my stay at Hostel Nina. Not only did they schedule someone to pick me up from the bus station as I was arriving after dark, it turns out it wasn’t even an employee of Hostel Nina but instead a fellow hostel owner helping out to ensure I got to the hostel safely.
While it’s not directly within the confines of Old Town, Hostel Nina is a mere 8 minute, one right hand and one left hand turn from the iconic Old Bridge. If I, the Queen of ‘Where Am I?’ still remember the directions months later you know it’s in an optimal location.

Best of all, Nina’s mother made us a FREE delicious light Bosnian breakfast every morning. Although cloudy, the mornings were beautiful and breakfast was served in the garden shaded by pomegranate trees. Even though I resemble the reincarnation of Lucifer every morning, I made sure to wake up in time for breakfast – it was that good. Not to mention the cleanliness of Hostel Nina could rival that found in a surgical ward.

Top Things to Do in Mostar

MEANDER THROUGH THE STREETS OF OLD TOWN

Having the unique privilege of being a city caught in the crosshairs of various cultural identities, Mostar’s Old Town features everything you’d expect in a Balkan Old Town but with an Ottoman flair as a result of its Bosniak Islamic heritage. Split in half by the Neretva River, one side of Old Town houses its Bosniak roots while the other caters to the Catholic Croats.

Most of the streets lined with trinkets and baubles aimed to attract tourists lay on the Bosniak side of the river. Being a sucker for Middle Eastern decor, I dazzled at all the lanterns hanging from kiosks and copper goods hammered by hand for sale. If only my backpack wasn’t already bursting at the seams I would have bought one of everything. Which can be easily done when everything, even the things geared toward tourists, are ridiculously cheap.

Because of it’s close proximity to Dubrovnik, Old Town receives hordes of tourists each day fresh off day tour buses. Around 6pm, when the sun begins to dip behind the rocky mountains, the real Mostar gives light.

Once the tourists head off, it shows a softer, more enchanting side to the city. You’ll definitely thank yourself later for staying at least a full 24 hours in Mostar.

Bosniak hand-hammered cooper jewelry in the streets of Old Town. -> 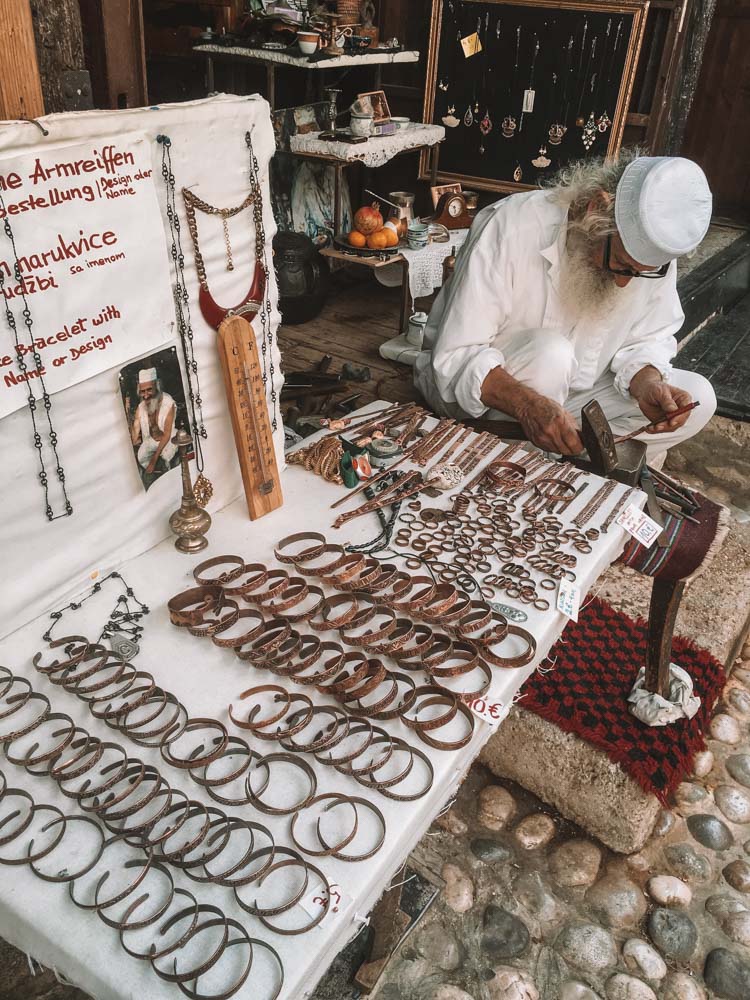 BRIDGING CULTURES AT STARI MOST

As the most sought after landmark in Mostar, Stari Most (literally translates to Old Bridge)links the two cultures on each side of the river. Declared a UNESCO World Heritage Site, the bridge was built in the 16th century and is a pristine example of Ottoman influence in the city.

After standing solidly for 427 years, the bridge was destroyed during the civil war. It’s said that the Croat army intentionally pelted the bridge with shells during the war due to its strategic positioning in the city.

Once it was reopened in 2004, tradition continued for local boys to become men on their 16th birthday by plummeting from its 24 meter peak. Personally, I’d rather have a party or eat cake on my 16th birthday but hey, who am I to say what makes you man.
Click here to watch the Red Bull Cliff Diving Competition from Stari Most

This is for you little daredevils out there: Do NOT attempt this jump on your own. With multiple deaths and too many injuries to count, the jump cannot be made unless you elect to take classes with the resident diving club. Once completed, they’ll guide you to the peak so you can fling yourself off and hope you live to tell the tale.

P.S.: Even with the addition of small raised concrete like “steps,” Stari Most is slippery af. And yes for those who know me, I did completely bust ass. Twice. In my defense it was raining each time. 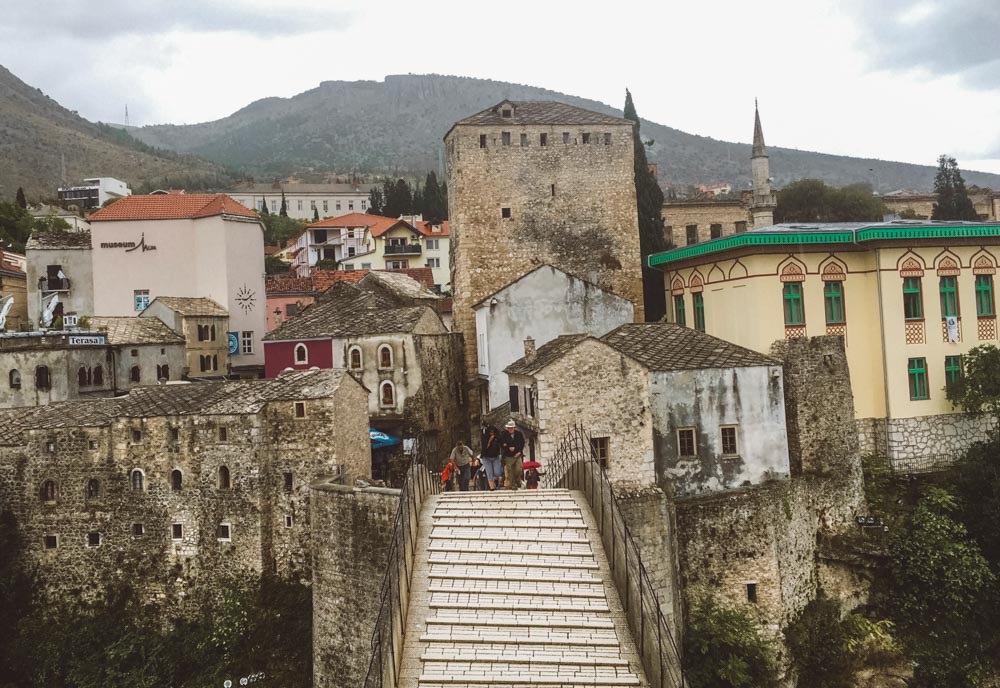 TAKE A LOOK AT THE WAR PHOTO EXHIBITION

While exploring Old Town and Stari Most it began to pour (hence the busting ass). Luckily I quickly took cover in the bridge tower and accidentally came across the War Photo Exhibition – a gallery of photos taken during the Yugoslavian conflict.

As a history buff, this was well worth the few euro entrance fee. Although it’s a quick browse, the photos taken by Wade Goddard during the civil war were wrenching. 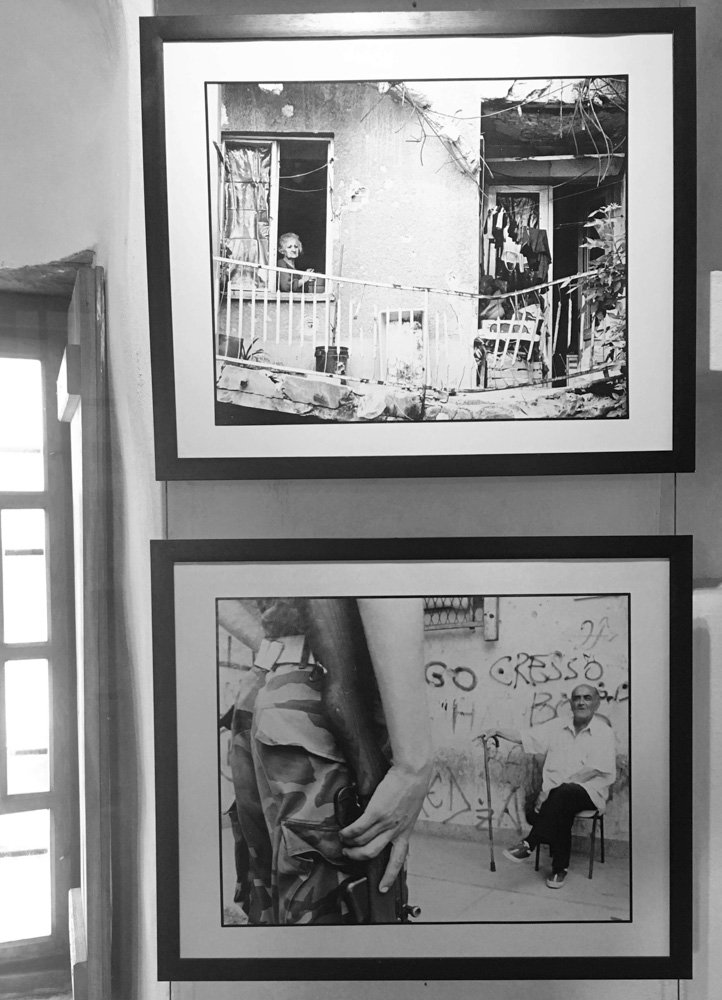 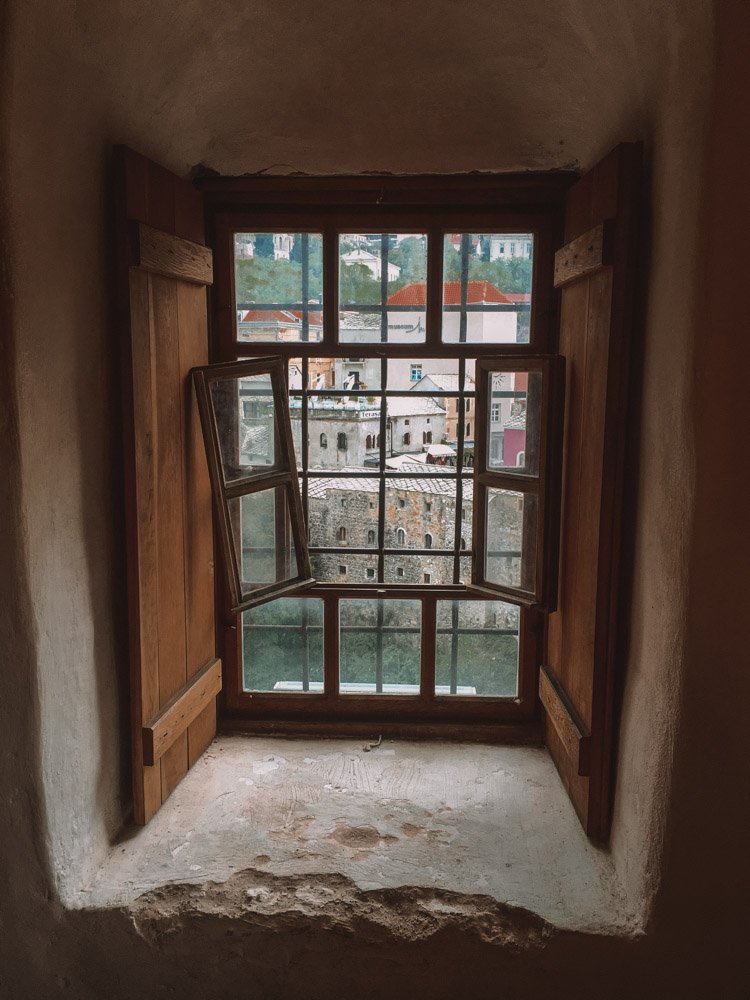 Seeing snapshots of injured civilians and women trying to cross Stari Most before its destruction under the cover of makeshift awnings to shield them from the sniper fire sent a chill down my spine. The photos of children with dirt streaked faces who would have been my age at the time hit the hardest.

GRAB A MEAL (OR TWO) AT TIMALRMA

After the rain subsided I headed to Timalrma, a traditional family-owned cafe for 30 years in the heart of Old Town. Growing hangrier by the minute, I opted to skip the wait for a cute outdoor table and took a seat at a long wooden bench inside.

And oh man was this food incredible. With the suggestion from my waiter (also the brother of the chef) I ordered the Ćevapi, minced veal and beef in meat balls with traditional bread and onions along with a Bosnian beer to wash it down. All this for a whopping 7 euro! I was in budget backpacker heaven. 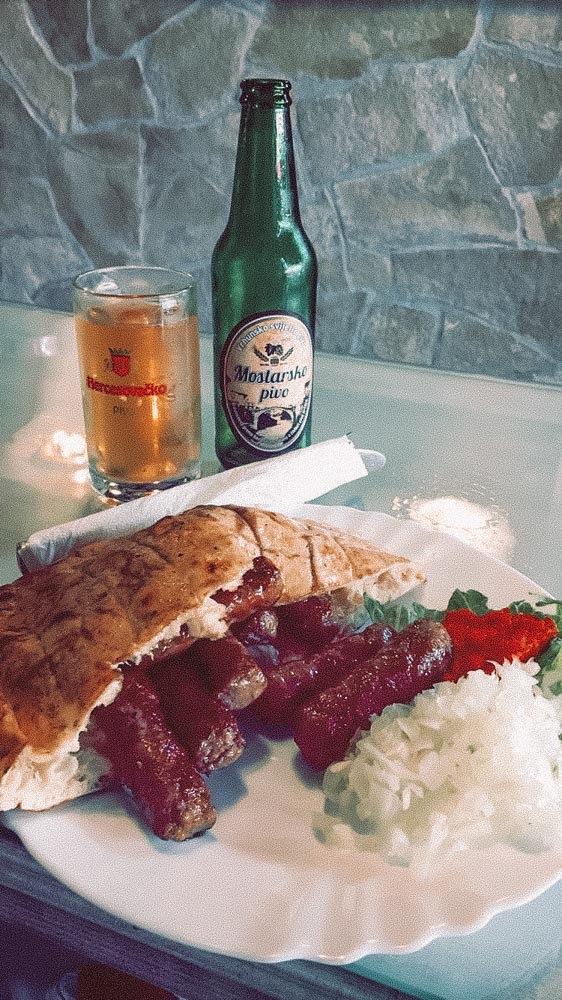 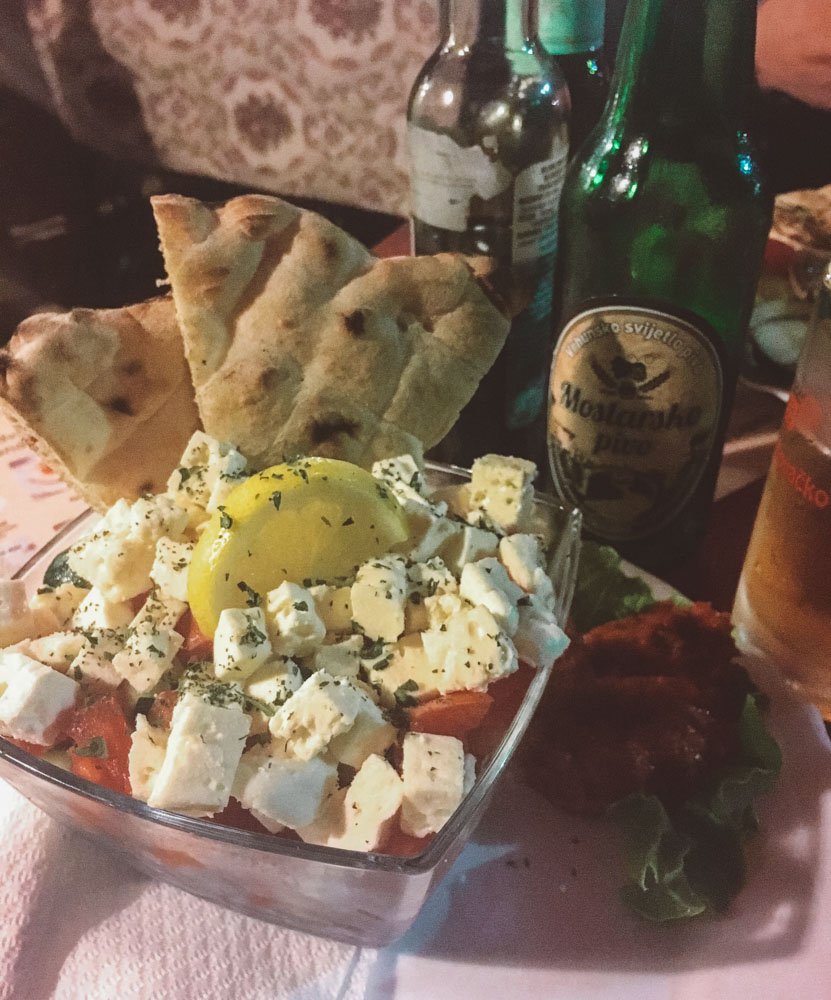 I loved Timarma so much that I went back for dinner that night with a hostel friend and ordered the Ćevabdžinica Irma, a cheese and veggie salad for a meager 4 euro. And yes, it was just as scrumptious as lunch. As a true testament to the nature of the Bosnian people, the chef recognized me from lunch, thanked me for bringing in another customer and gave us free beer. She knew the way to my heart that’s for sure.

After lunch I walked south to Vučijaković Mosque dating back to 1564. Although I ended up arriving during closed hours, you can enter the mosque for a small fee and climb the very narrow minaret for a hell of a view.

Before the war, a little park was erected next to the mosque. Due to lack of space for the rising body count and the other cemeteries in the area compromised due to their close proximity to sniper fire, the park was turned into a burial ground during the war. 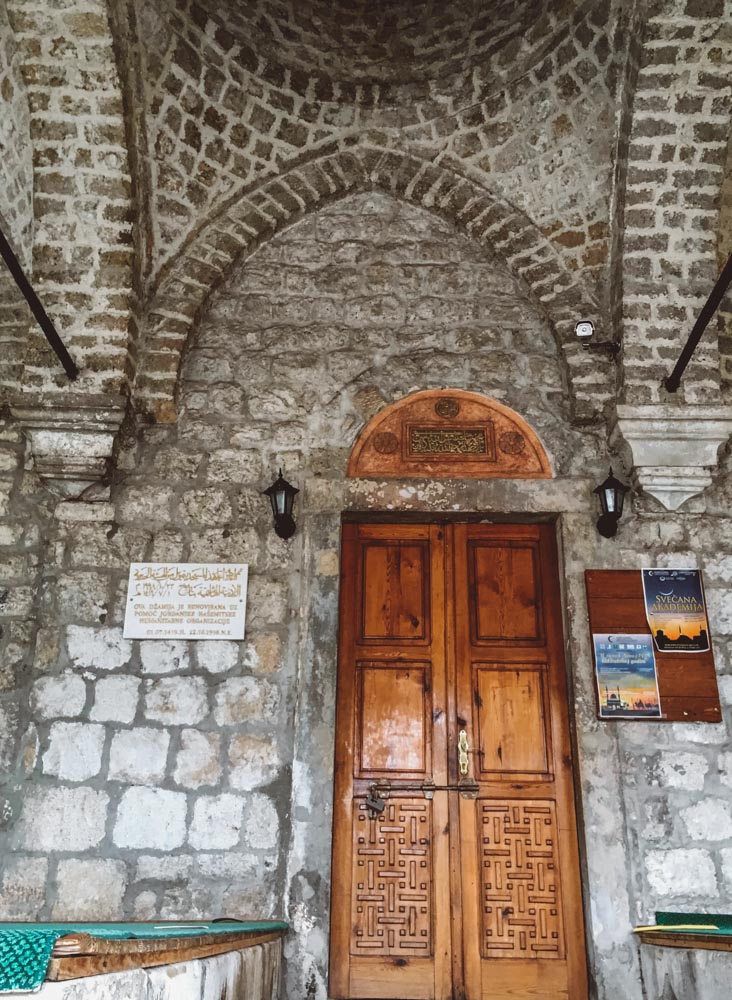 This wasn’t the first cemetery I visited in Europe. But it by far had the most resounding effect. The other burial grounds I had come across during my trip were peppered with historical tombstones spanning centuries and others who had lived long, memorable lives. The tombstones in Mostar were almost all exclusively dated to 1993, 1994, and 1995. The average age of death was around 20-35 years old.

CHILL ALONG THE RIVER BANK

In a place like Mostar you can’t help but reflect on the effects war has on a community. Chilling along the river for awhile became a welcoming break. There’s a little river bank near Stari Most perfect for a swim in the summer or a place to dip your toes, although sections of the river were heavily polluted with trash while I was there.

My favorite though was stumbling across the much smaller Lučki Bridge, south of Stari Most, that offered more secluded views of the city. 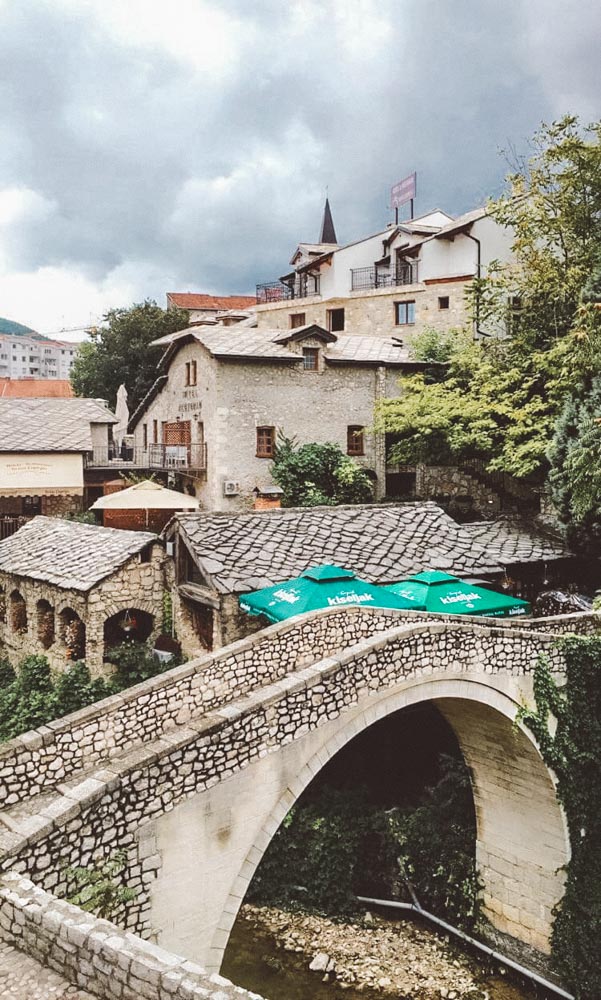 After a long day of checking off things to do in Mostar, I headed back into Old Town to grab a brew at Black Dog Pub. Although it should have only taken us maybe 15 minutes to get there from Hostel Nina, our Google maps betrayed us and had us walking in circles for 40 minutes before finally hearing music coming down below.

Pro Tip: Ask for directions to the pub from a local. Here we a fine example of technology failing in the twisting turns of a city built when the moon was the only satellite. 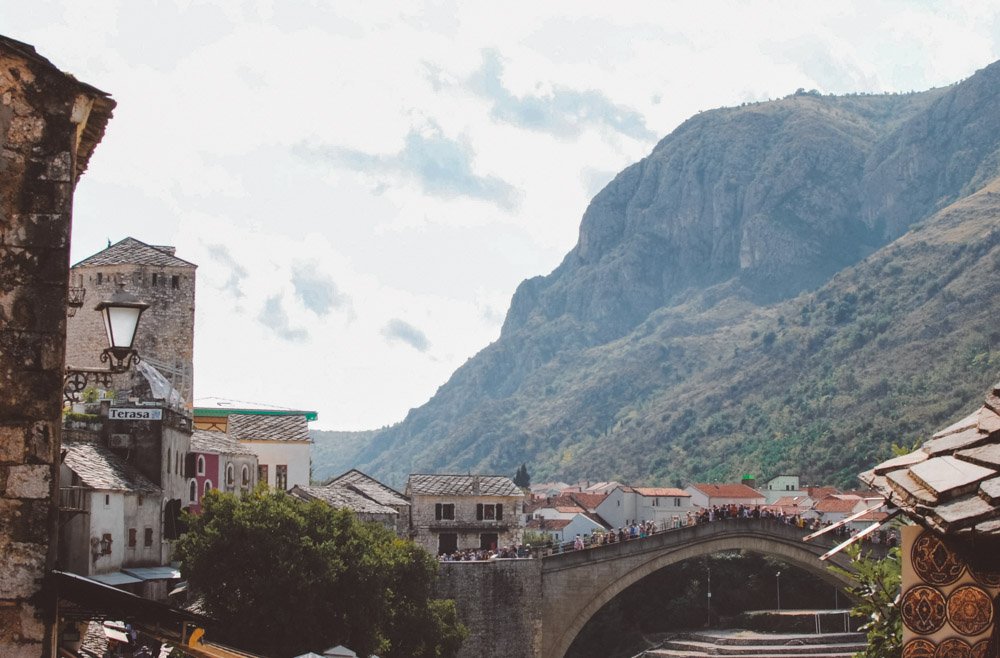 As soon as you step foot in Mostar there’s no denying its role in the Yugoslavian conflict. In countries like Croatia catering to a recent boom of tourism, the scars of war have long been erased. Stitched up in closed books of yesterday.

Unlike its northern counterpart, Mostar has made no attempts to completely hide it’s past from visitors. As one of the most intense battlegrounds of the war, the people of Bosnia refuse to let their tragedies sink into a forgotten history.

Walking around Mostar with its collapsed buildings overgrown by nature, actual homes peppered by bullet holes, it becomes a sobering moment to see firsthand the physical manifestations of war. Yet at the same time, through the ardor of the people, the city has become a humble testament to the resiliency of human nature. 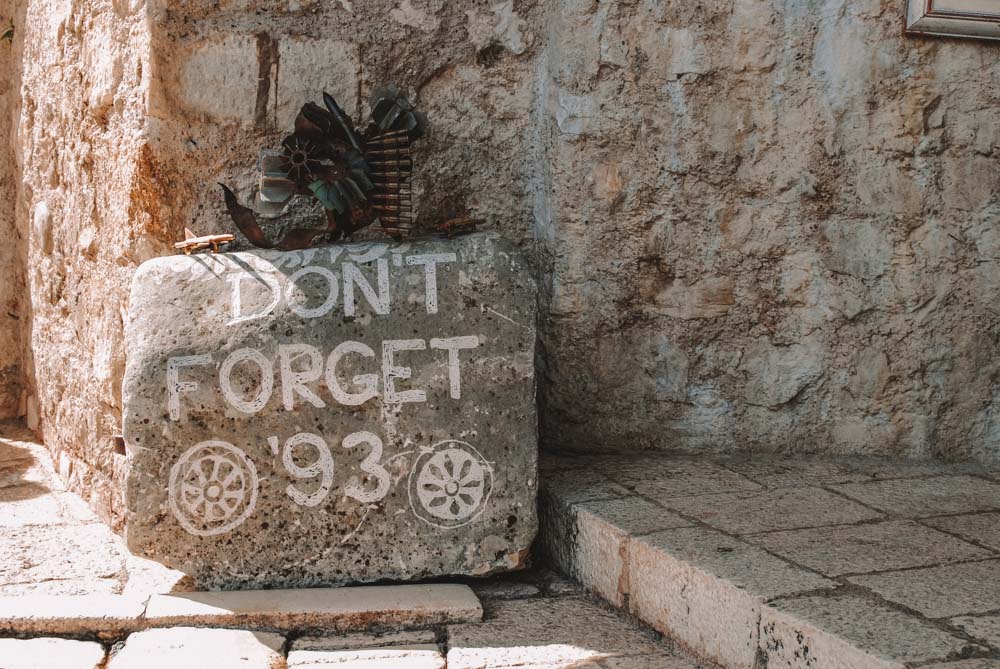 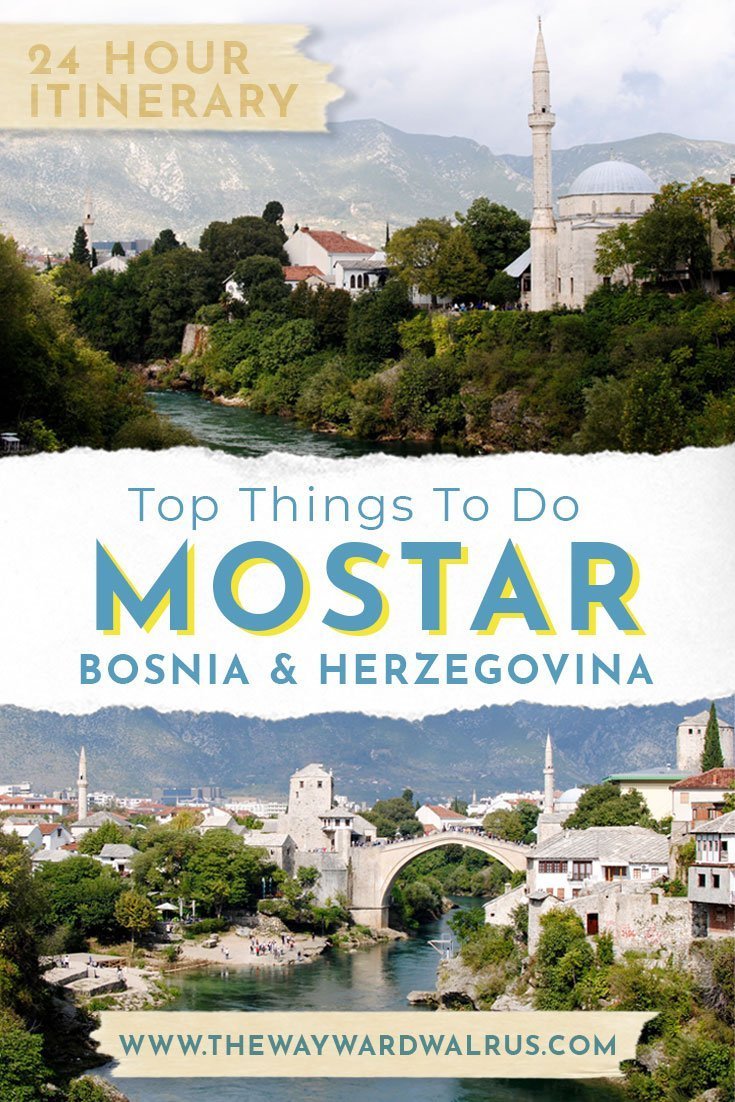 Happy #InternationalWomensDay to all the amazing w

International travel plans are on the horizon my f

Have you ever visited a city abroad and you just i

Well it still hasn’t snowed in Denver yet, so he

no risk, no magic ✨ (also I miss traveling) M 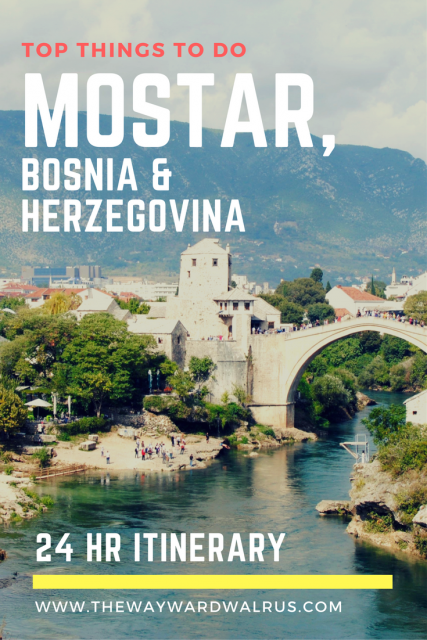